Find An Activity
Back To Your Stories Next Success Story

"I’ve learnt that being active regularly goes far beyond weight loss and how you look – it’s about your mental and physical health too."

Tash first got started in ladies-only kickboxing when she noticed they were advertising classes on Facebook in the town she lived. She thought it sounded fun and like a sport you could develop in, as well as losing weight too; she also liked the idea of taking on a sport that would teach her self-defence.

I felt like I needed a hobby and needed to create a healthy relationship with exercise where I wasn’t forcing myself to do it and I hated every minute of it; I wanted to find an exercise that I really enjoyed!

She messaged the Facebook page asking if she could join the next class. However, it took 3 attempts for Tash to actually attend. The first time that she signed up her nerves got the better of her and she too scared to go. The second time, a while later, she couldn’t find the venue! Finally she decided that she needed to take the plunge, and if she didn’t enjoy the class then she didn’t have to go back.

The third time, Tash went and was incredibly nervous.

“Luckily there were people there who were new too who looked just as terrified and out of place as I felt, which was very reassuring,” Tash recalls. “In fact, one of the newbies who started at the same time as me is still going now!”

I think that’s the thing with exercises classes and taking on a new sport – everyone was new to it and at one time and it definitely helps when you go and there’s someone else in your shoes.

That first class she went to was tough; not just because of being nervous but because it was a hard class. Tash did not realise until the end when the endorphins were rushing how much fun she’d had. The instructor played some great music; they wore gloves and pads which were great for punching out those frustrations from a stressful day. She came away tired, incredibly sweaty but so proud of herself that she’d gone in there, alone, and done the class. Now, Tash applies that to everyday life and to things that she finds daunting.

I think to myself, if I can walk into that kickboxing class on my own, terrified and in terrible in shape, then I can do just about anything! 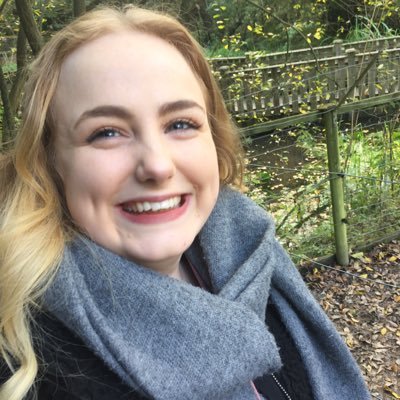 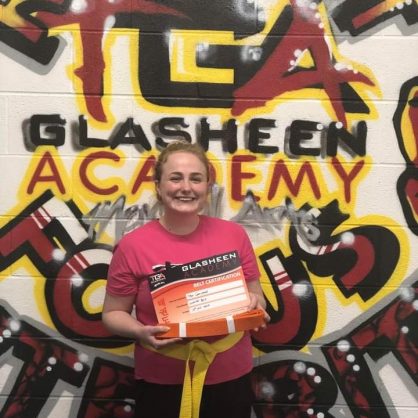 When Tash first started attending the classes, she was totally unaware of martial arts belts or how they worked. Part of doing the classes is that you work up towards your different belts and then eventually, if you stick to it and work incredibly hard, end up as a black belt.

Initially, you could say I didn’t really attend because of the belts but now they’re a massive incentive to go and try your best. Plus they’re a great way to gauge how far you’ve come and how much you’ve developed. I’m currently on my third belt and feel miles away from the level of fitness and skill I had when I first went.

Tash had tried many other sports, activities and fitness classes before and she’d never found one that stuck. She felt that they’d always been a bit of a blip that she’d tried to force herself to do to lose a bit of weight. Since then, she’s learnt that being active regularly goes far beyond weight loss and how you look – it’s about your mental and physical health too.

Tash wanted to find something she could stick to and enjoy. She’d essentially tried everything; running, cycling, exercise classes, going to the gym, yoga, but it was all a bit mundane. However, while she was at university, Tash had been to a ‘Drum n’ Blitz’  fitness class. Working out to dubstep while using gloves and pads was quite niche but she really enjoyed the boxing element of it. From there she found kickboxing, and became a firm fan.

A big element of finding an exercise you enjoy, is trying a bit of everything and figuring out what you love and loathe.

“I don’t think I’ve always had a positive relationship with exercise,” Tash recalls. “At school, I really didn’t like PE and used to dread the lessons! I was never any good at any of the classes, naturally sporty or very confident. I always saw exercise as a bit of a chore or something you did when you wanted to lose weight so I always had negative associations with it.”

Tash tried out different fitness classes at my local gym while at university as a break from studying. Making an effort to try the different classes, she learnt what she did and didn’t like and eventually discovered that she enjoyed boxing.

Kickboxing for me has definitely taught me that being active go beyond how you look. I’m so much fitter and stronger. I’ve learnt how to defend myself and after a really long and stressful day, I have a way to relive that stress and pressure of everyday life.

Being active has had a big impact on Tash. It’s made her feel better and taught her how to motivate herself. While exercise will never be her favourite thing to do, she knows what a difference it can make.

“When I feel like I can’t be bothered to go to class, I tell myself I’m probably never going to really, really want to,” she tells us. “Especially during the winter, the last thing you want to do is leave your house at the end of a long day into the cold and dark. With that, I feel proud that I’m able to talk myself round to going and never, ever regret a workout.”

“For anyone who is totally not naturally sporty and hates the thought of squeezing into a sports bra, I’d definitely say to try different things and be open minded. Try different exercise classes or even just try workout videos on YouTube – there are tonnes on there!

We certainly need to put less pressure and stop having a certain expectation of we should be doing, especially around January time when it seems like everyone else is joining the gym and you feel like you have to too. Everybody is different and we all have different levels of fitness too, it’s just all about finding your fitness ‘thing’ and what suits you and your lifestyle and making those healthy habits last.”

Read other real life stories on how getting active and taking part in your favourite activities has changed lives.

"It's changed my life. I can't be happier with what's happened. "

"When I put my mind to it, I could do it. The only limitation was me. "